Writings about my life as a wife, a submissive, a Pagan, a mother, a daughter, a lover, a student, an educator, a fighter and a peacemaker. Blessed be ⭐❤⭐

Ice is a very versatile tool in a Dominant’s sensory play bag of tricks. Ice can be used as a method of pleasure and also as a punishment technique. Most submissives (and some Dominants too!) enjoy the feeling of an ice cube being traced over their bare nipples and down their nude bellies during a scene.

I’ve even known Dominants who punish their submissives by placing multiple ice cubes up inside the submissive…and the submissive must clench to keep the ice inside as they stand or kneel over a towel while the ice melts and the cold water drips from their body. I’ve personally experienced this punishment with a former Dom…and as a result of this association with punishment, I’m no longer a fan of ice play.

While talking with my Dom last night, i mentioned a post about the Clothes Pin Zipper String Method and how I’d have a few sets ready by the time He visited. I could hear the excitement in His voice as He told me about His latest idea to break thru my “big freeze” (ice play) barrier…Ice Cubes on a String!!

The concept is similar to a clothes pin zipper string method. First, fill an ice cube tray half full of water and let it freeze completely. Then place a length of string or ribbon across the top of the ice and secure the string/ribbon on each side of the ice cube tray. Next fill up the ice cube tray the rest of the way and allow the ice to freeze with the string/ribbon in the middle. When you remove the ice from the tray, the ice cubes will be attached. The ice cubes on the string can then be used on the submissive by placing the cubes one by one into the submissive…and then yanking them out all at once during orgasm.

What are some of YOUR favorite ways to enjoy sensory play with ice? 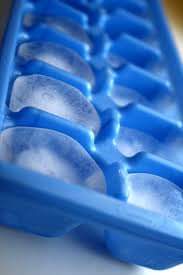